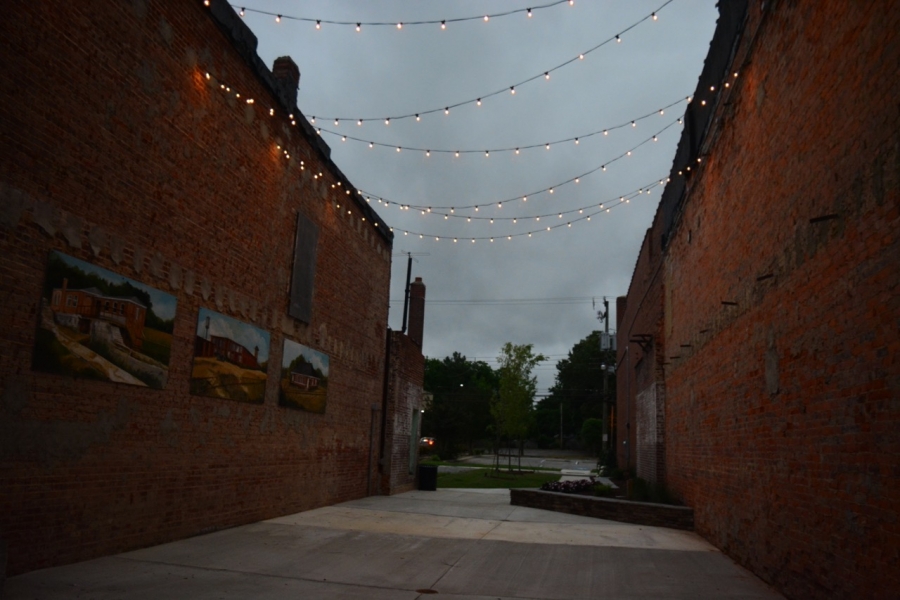 The water feature at the 1026 Roanoke Avenue urban green space has been installed and the city’s public works department is working on tweaks to the system which allows the water to fall down metal screening and into a tank.

This will not be the only work done on the water feature as a sculpture will be made to accompany it, Main Street Development Director Christina Caudle said today.

Main Street Roanoke Rapids was awarded a $2,000 grant from the Halifax County Arts Council to cover the artist fee.

Chris Fromal was selected to do the sculpture which will fit in with the theme of the open space — the river, rail and textiles.

Caudle has already seen people making use of the open space since it opened in conjunction with Arts on the Avenue in May. “I’ve seen photographers doing senior portraits, I’ve seen citizens utilizing the parking in the back and civic organizations using it for presentations. There have been several people interested in using it for events this fall. The project has exceeded our expectations. It’s a great space in the heart of the historic district.”

Caudle has tentatively scheduled an appreciation event at the space on September 27 in which the partners who helped bring it to fruition will be honored. It is expected the event will be held at 5 p.m. and more details will be forthcoming.

The water feature was born from a conversation of how to make the open space better as well as a way to drown out traffic noises.

Roanoke Rapids Public Works Director Larry Chalker said planning and design of the water feature began around three months ago when employees built a prototype out of scrap.

Once the prototype was deemed right, construction of the feature began. “We have the best employees and I’m proud of that,” Chalker said.

The water feature will eventually be backlit to make a color splash of the water.

Public works has left its fingerprints on much of the work which led to the completion of the space. “We’re very proud to be a part of it,” Chalker said. “Our sweat is all over the place. It’s beautiful. It’s come together.”

Said Caudle: “This is a textbook example of why it was so important that we create a public-private partnership.”